The Silence Before the Buzzer

At the beginning of April, in the "welcome back" post (of sorts), I mentioned that we just have to be done by mid-May. I think there were two other occasions in this process where we set some sort of artificial deadline that either came and went or was nearly impossible to achieve. Ups and downs occurred with some full stops.

That said, it is now mid-May. The guests we were expecting arrive tomorrow, and will be staying in our guest room, just across the hall from the bathroom of doom. When they head out of the room to take a shower or use the facilities, this is what they'll get. 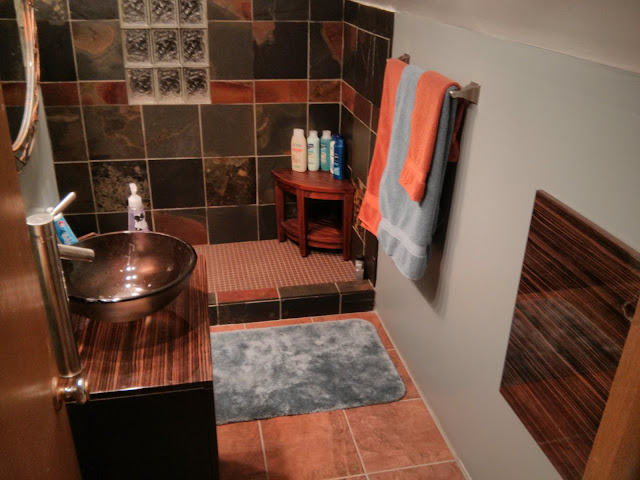 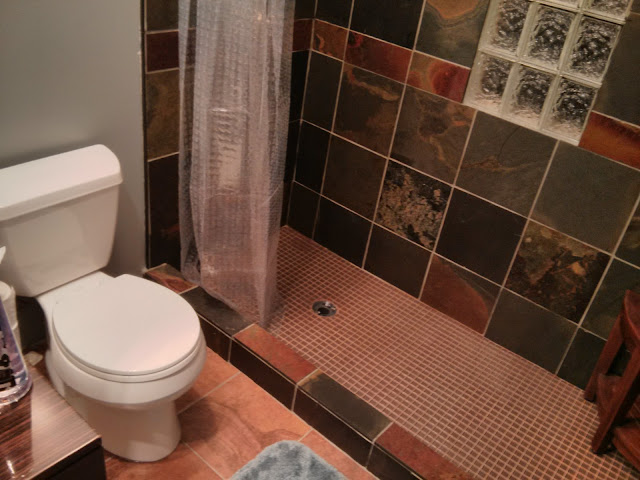 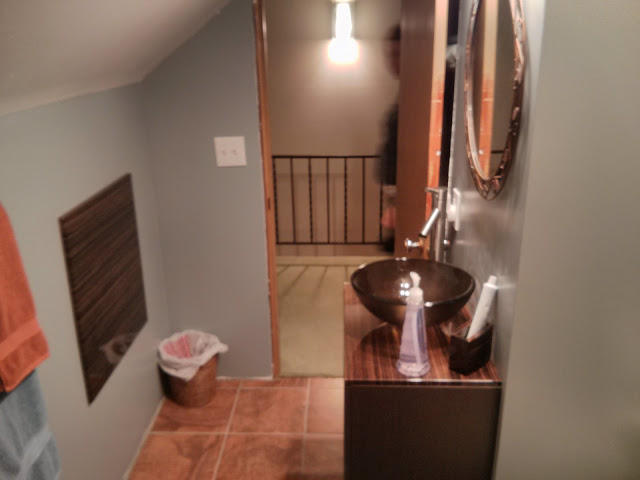 We're still not entirely finished... we still need trim on the floor, around the door, and around the new closet. We also need to do something around the window so you can't see into the backerboard and top of the tile, but it's definitely functional, usable, and if I do say so myself, pretty nice looking.

The last post was from our grouting adventure, and that went alright in the whole scheme of things. Since then, we dehazed the tile, sealed the grout, sealed the shower wall, and put another coat of paint on the wall. I got the vanity put together, drilled some holes, and mounted the faucet and sink.

Last night, I tried doing a first pass on the electrical, since the company who did the work  still doesn't have availability. Long ago, the electric was roughed in. A new feed was run to the bathroom, a switch box was fed, the fan/light was wired to the switch box, and two lines sat with electrical tape on the ends near where the sink would go -- one for an outlet, one for an overhead vanity light. We were hoping to get him back to finish up, but times are busy. So. I work in software development. We have this concept of "minimum viable product", that is, what is the minimum necessary to get a feature out, that you can build on later? Putting that into practice here, I figured I'd wire up a switch to be able to turn on the fan/light, so something was usable until we could get an electrician. I wired up the switch, turned on the power, and.. nothing. Touched the tester to the feed wires, no power. I gave up for the evening.

This morning, our plumber came by to finish the fixtures. He installed the toilet, shower head and valve, and set up the trap and water lines for the faucet and sink. Running water is a beautiful thing, and so is a toilet.

I gave the electric another go today after emailing the electrician who did the original work (who doesn't work at said company anymore). He suggested that he probably ran the feed to the outlet, since it is GFCI, and would protect the rest of the bathroom. Figuring I just had to do more work, I cut into the wall, pull out the romex, and find two cables. Aha! Installed the box, wired the outlet, and boom, power. Success! Finished wiring the switches, and got power to the fan/light, and decided to just finish, and installed the vanity light. Electrical and water in the same day? Smells like success.

After that, we decided to make it livable. Towel bar, shower curtain and bar, various holders, cleaners, so on. It's almost a real bathroom.

We're certainly exhausted from the work today, including the cleanup, but I'm thrilled with the results. Next week, we'll probably be doing the finishing touches on the trim, and deciding whether to replace our countertop with something more durable. We also have to get an estimate on glass for the shower to replace the odd shower curtain against a sloped ceiling. But, I think this is a pretty good spot to be.

Just for fun, I think we have before pictures from approximately the same angles. 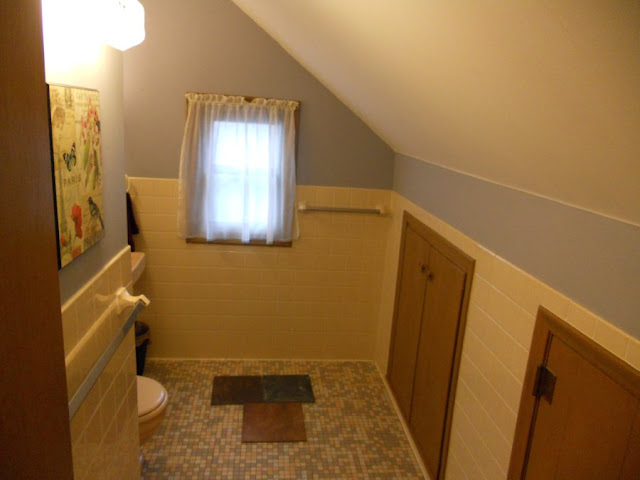 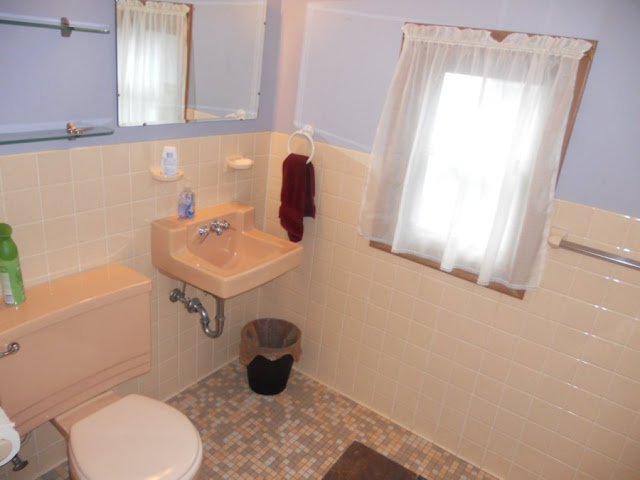 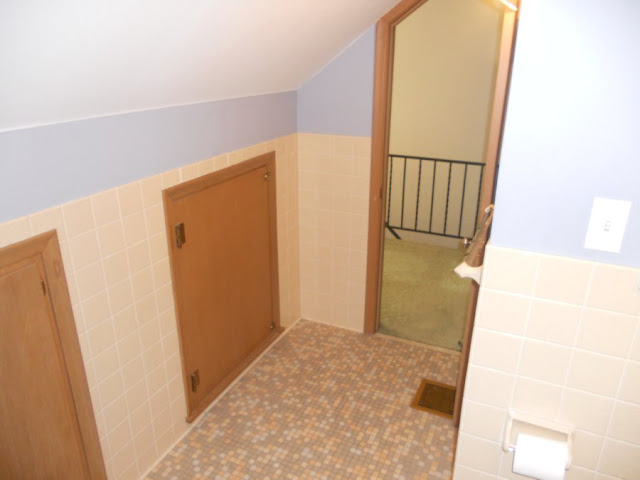 Unfortunately, we're both ridiculously tired, but at least our goals were accomplished this weekend. Walls are painted, floor, shower floor, and shower walls are grouted. Grout is a pain. Grout is even worse on a vertical surface. I don't get it. Why do people tile? This is dumb.

Tomorrow should be de-hazing the grout from the tile and potentially sealing the grout on the floors, and if all goes well, drilling holes in the top of the vanity for the sink and faucet.

I should also probably get around to wiring up switches, but I have no idea. 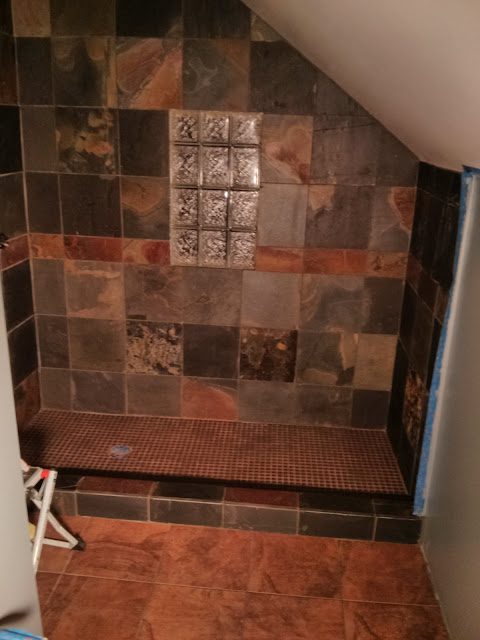 Please stop the ride from spinning

We're entering the weekend, but enough changed that I wanted to give some element of "before".

This week, we (and by we, I mean mostly my wife), finished setting the tile in the bathroom. My job was mostly "cutting the tile" and "retrieving crap from somewhere else" and once in a while, "mixing more !@#$ thinset".

The plumber called back and should be able to finish off fixtures before our friends arrive next week. The electrician was wishy-washy, so I bought some supplies at the local big box home improvement store just in case I feel like getting electrocuted this weekend. 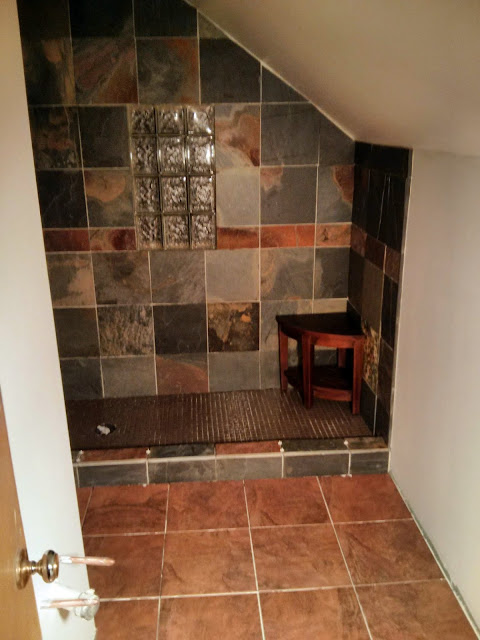 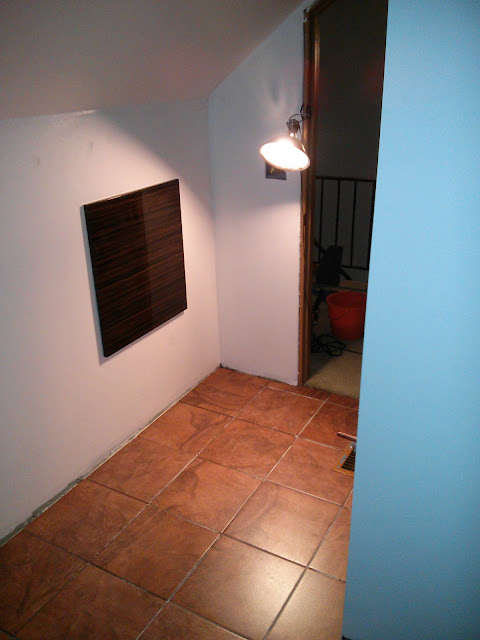 I am so sick of mixing thinset

Seriously. So sick of mixing thinset. And, you know, the rest of this tiling thing. :P

This week is a mixed bag due to work and other commitments, but at some point this week, I will be putting down that cut tile, and hopefully, measuring/cutting/placing the tile on the shower curb. Hopefully, the plumber calls back, too, as I'm not really looking to get something to cut copper pipe. At least I'd feel okay if the electrician couldn't make it out. 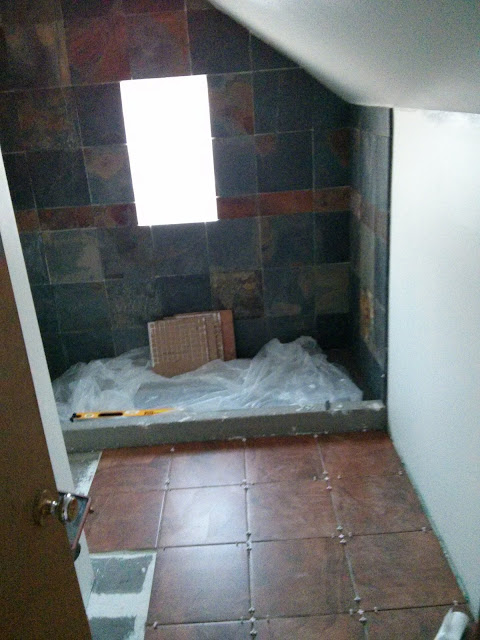 Augh. This is slower going than we thought, and the lack of motivation on our part isn't helping anything at all.

This weekend, we finished tiling the two side walls of the shower, as well as set up the border trim on the edges of the shower. In the middle of it, we had to make some runs to the tile shop and the local home improvement store, and dodge some rain in the meantime.

We are running behind, so we'll have to make up some time somewhere else. I'm not sure we've cleaned the house in two weeks. :\ Hopefully we can still get finished in time... 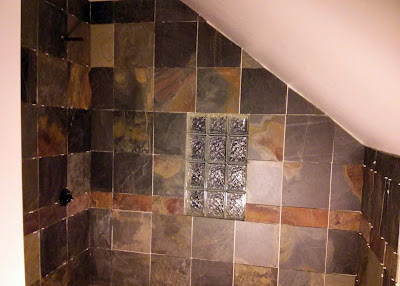 Last weekend, I wrote about getting everything primed, and laying out the tile. That did, in fact, happen, but no pictures were really required, so no post was made. The ceiling was painted with a semi-gloss white to help keep moisture down, two coats of primer were put down, and my wife did layouts of tile for the three shower walls. I then spent Sunday night applying Goo Gone to my arms and face.

This weekend's work was delayed due to a couple of mistakes. We bought a corded drill to connect our thinset mixing bar to, but didn't buy one with a big enough chuck. I tested the drill this week, but didn't try to connect the two until the day of reckoning. I didn't fiber tape and thinset the seams between the backerboards yet, so that had to be done and dried before we started. We also didn't silicone caulk the gaps between the glass block window and the backerboard, either, and that had to be done. So, Saturday was filled with trips to Home Depot and Ace Hardware, combined with completing those activities, and fitting base boards to start tiling from. Luckily, that went pretty well, and it was a nice, sunny day on top of it.

Sunday was then reserved to tile. Naturally, it was cloudy and raining off and on. :) A couple of the newer pitfalls is realizing that our slate-ish tile vary not only in thickness but up to 1/4" in height and/or width. The other fun part was the huge slope due to our 1.5 story house making tile cutting fun AND awesome. At least we killed one tile saw blade. The unfortunate part is that by the time we were hitting the last pieces, we lost our source of light, so the wall is still down two pieces. 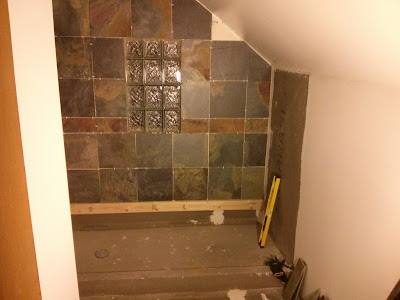 Little Lessons Along the Way

I learned something new today. Always read the instructions, even if you think you know what you're doing. Today, we used some high strength oil-based Kilz to prime the ceiling of the bathroom. As it always is when rolling or brushing stuff on the wall or ceiling, the primer ended up in hair, on hands, or on face. The thing we didn't realize is that when using Kilz, you should have gloves, goggles, whatever else on, because otherwise, it is not coming off. That was fun.

Anyway, sheet rock was taped, and we primed the walls and ceiling today. Looks even more like a room now. Tomorrow, ceiling gets painted, and we finish laying out the tile. My wife has a plan! 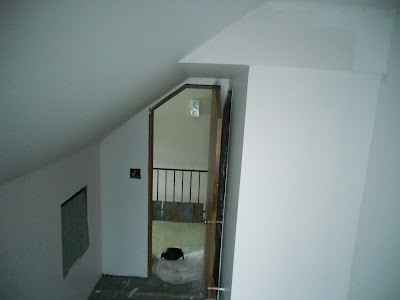 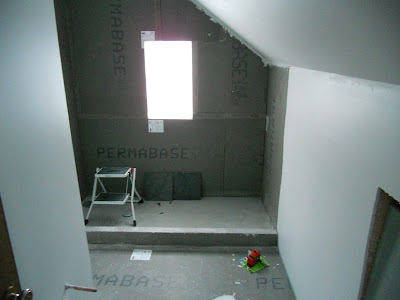 More updates as they come.

P.S.: My wife just commented that my last line regarding her having a plan means that I have an out if it doesn't work out. That's not the case. That's just my acknowledgement that I wasn't happy doing the task, so she took it up.

Nick
Minneapolis, MN, United States
We're married and living in our first home, circa 1953, in a corner of Minneapolis. It only took about a year before we needed a few changes...